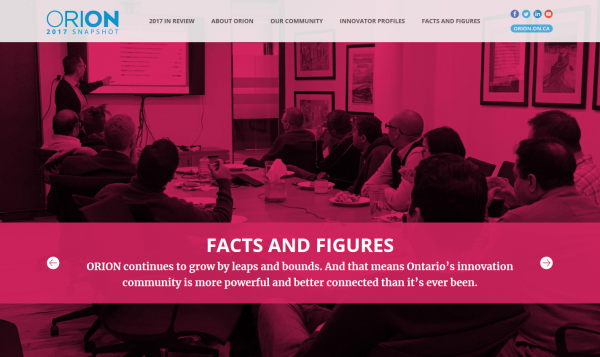 Today at Day 1 of THINK, during our Advisory Group Meetup, I unveiled our year ahead. At the same time, I launched our “year that was”. I hope to see you tomorrow at THINK so I can tell you more. In the meantime, you can learn about some of the things we’ve been working on in the past year.

This was an important year of growth at ORION, building on our momentum of a transformative 2016. We moved into new offices, giving new life to a historic building by transforming our floor into an open, collaborative workspace; welcomed new directors to our Board; and continued to expand and improve our network and services in order to empower the researchers, educators and innovators who make Ontario — and the world — a better place.

We entered this year with a clear and ambitious set of goals, which I wrote about last year. The ORION team has been hard at work meeting every single one of those targets.

We improved our product offerings and our service delivery. We launched new customer support software in 2017 — part of our ongoing mission to better serve the innovators who rely on ORION to power their work.

We also introduced a shared Chief Information Security Officer (CISO) pilot initiative together with eight higher education institutions in Ontario. The two-year pilot project addresses information privacy and cyber security challenges. We are thrilled by the response the project has already generated; it earned positive media attention and was nominated for a 2017 Canadian Higher Education Information Technology (CANHEIT) award.

We expanded the reach of our digital community. This year, we welcomed even more institutions to our digital community: the Conseil scolaire catholique MonAvenir, McMaster Children’s Hospital, CENGN, and the City of Vaughan/Vaughan Public Library have joined more than a hundred other institutions who rely on our network every day.  Their researchers, educators and innovators are now among more than two million change-makers ORION connects across the province.

We’ve also been involved in some major government-supported digital infrastructure projects. Our assessment of the digital infrastructure opportunity in Northern Ontario, for example, will be used in support of our efforts to welcome more innovators into our community from remote regions of the province, increasing our diversity while providing equal access to the innovation economy.

We actively engaged with our community. In 2017, we continued to ensure that we were in touch with the changing needs and desires of Ontario’s innovation community. We met regularly with our advisory groups; our collaboration with them has inspired the development of a “needs matrix” as well as the launch of several pilot projects that will lead to even more improvements in the years to come.

We renewed our focus on collaboration and advocacy. ORION is passionately committed to serving as a champion for the innovation community in Ontario. This year, when the CRTC announced that many in our community might have to register as internet resellers, we kept our community updated on the status of the initiative and spoke directly to the CRTC to express our community’s views. We coordinated with the CRTC and NREN and deadlines were delayed by a year in order to allow enough time for a proper and thorough investigation of the proposed initiative and the impact it will have on the researchers, educators and innovators who drive innovation in Ontario.

Given all our recent success, I know that 2018 will be even better than 2017 as we continue to establish ourselves in our new role and capitalize on the momentum we’ve already created. I’m excited about the path ORION is on and I’m looking forward to building on our successes as we help Ontario strengthen its position as a global leader in innovation.