University of Toronto researchers, working with collaborators from Osaka University, Toyama University and NTT Corporation in Japan, have built a proof-of-concept all-photonic quantum repeater, a device that could serve as the backbone of a future quantum Internet. Their device addresses some of the challenges in transmitting quantum information across great distances via optical fibre.

Since optical signals weaken as they travel long distances via optical fibre, devices called repeaters are inserted at regular intervals along the line to amplify them. However, building repeaters for quantum information is difficult. Current quantum repeaters are error-prone, difficult to build and very expensive since they often operate at cryogenic temperatures. This new device would eliminate or reduce many of these shortcomings.

A metamaterial is a material whose structure is designed to give it properties not found in nature. Metamaterials can absorb, reflect or refract electromagnetic waves to achieve various effects, such as bending light or sound waves to enable cloaking of objects.

The project will explore various applications of metamaterials, including absorption enhancement of ultra-thin solar cells, light emission enhancement for LEDs, development of optical filters and the improvement of medical diagnostics.

A surgeon in China’s southeastern Fujian province has performed surgery on a laboratory animal roughly 50 km away via a 5G network. The surgery, which involved removing the animal’s liver, was a success. The experiment shows the great potential for 5G technology in remote regions, such as Canada’s North.

Waterloo very much in the game in quantum computing

As IBM moves forward with its ‘Q’ quantum computing ecosystem and partnering with top global labs, the Region of Waterloo is surging ahead with its own quantum tech. Dubbing the area, ‘Quantum Valley’, BlackBerry co-founder Mike Lazaridis has invested hundreds of millions of dollars in Waterloo-based quantum research since 2000. With the federal and provincial governments more than doubling Lazaridis’ contribution since, total quantum investment now stands at about $800 million. Waterloo-based researchers work in areas including quantum cryptography, quantum radar, quantum sensors, quantum materials and error correction in quantum computers. 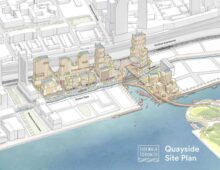 Google affiliate Sidewalk Labs has outlined new technologies for its planned Quayside smart city, which was proposed to Waterfront Toronto’s Digital Strategy Advisory Panel on January 17. These include: